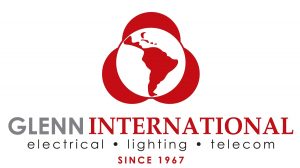 Glenn International is the leading supplier of electrical, lighting and telecom equipment for the Caribbean and Central America.

The name Glenn has been associated with the field of electrical construction products for over 70 years. Glenn Associates was founded in 1927 by E. Barron Glenn in Atlanta, Georgia.

In the sixties, a young undergraduate from the Georgia Institute of Technology, Raul Rodriguez became employed with Glenn Associates. Upon graduation from Georgia Tech, Mr. Rodriguez, along with Floyd Blair (also a graduate from Georgia Tech and a registered electrical engineer in Florida) and the support of other members of Glenn Associates, incorporated Glenn International, Inc. in Puerto Rico in 1967.

During the 80’s Floyd Blair returned to his Florida business, leaving Mr. Rodriguez and Mr. Diaz as the principal partners of Glenn International. Recently after selling his Florida operation, Mr. Blair rejoined the firm as a consultant and senior advisor.

In 1995 ground was broken for construction of today’s Glenn International headquarters in Puerto Rico. The custom designed office/warehouse complex displays unique concepts in office environment design, as well as showcasing some of the most technologically advance electrical and lighting systems supplied by Glenn. In addition, each workspace connects to an arboretum, providing a tropical “rain forest” ambiance.

In December 2006 Carlos Diaz acquired all shares from Mr. Rodriguez and with the assistance of his two sons Ignacio and Ricardo, and the exceptionally dedicated employees of Glenn International, the company has launched into a new era of redefining representation.

From the largest variety and the best quality of electrical, lighting and telecom products, to the most dedicated and competent sales staff and technical support personnel, Glenn International delivers.